Here’s a presentation I did on the value of a Personal Learning Network (PLN) as part of  a TeachMeet@PLANE online session on the 25th of July, 2012.

The presenter notes DEFINITELY help you make sense of it all. You will need to visit the actual Slideshare site to see them. Just click on this link to go there.

Research, The Olympics and some stuff in between.

After a recent #pechat on Twitter not long ago (follow this link to see an extract on Storify)  I knew I had something to share about formal research and teaching practice, but it was hard to get the thoughts buzzing in my head and crystallise them into words. So I did what I normally do to get things flowing – I went for a ride and things started to fall into place.

Let me start by saying – I love analogies.  It’s probably the narrative aspect of them that gets me in and helps me explain things to myself, as well as to the kids at school.  I love what stories and narrative can do to a dry concept. There will be some judgements and morals, just like all good stories. So bear with me, because it might start off far fetched, but hopefully it will become clearer for you, like it did for me.

To me, peer reviewed, serious academic research is the Olympic athelete (let’s call him Jim) of developing thought and practice. Jim is usually in the domain of theorisers on a world stage who have something to prove at an elite level. Jim competes in a high stakes, reputation based competition for the quest for gold. Jim has one aim in mind, and is funded for one purpose. For the everyday teachers it can be hard to understand the context of Jim’s hard work, but they do hear the applause from his supporters at the end when something great happens.
Conversely, anecdotal innovative teaching in the classroom can be seen as the local league (lets call them Jo). Jo usually finds their work organised and conducted with limited resources. Jo doesn’t always have the luxury of focusing on their competition exclusively – they usually juggle extra curricular duties (usually as volunteers) while advancing and developing their own skills.

Unfortunately, I’ve seen a mutual distain develop between Jim and Jo sometimes, based on the lack of a nexus of understanding based on a variety of things. Purpose. Relevance. Validity. Sort of like two spectators at a match having a crack at each other about which of their teams are better. I’ll let you ponder that, then we’ll push on.

I’ll be the first to acknowledge that what I do in schools today is based on research. Research delivered by my course lecturers to give me a chance of understanding what I faced in teaching. And I know that throughout my career, research has been used to support advances in, for example, teaching quality usually( unfortunately) to blank or confused faces in the audience. I’d contend that teachers don’t get it.  And here’s the rub – it’s not the actual research that’s the problem – it’s quite often the package it comes in that does the damage.

Usually, teachers looking at “proper” research do it for a external reason. As part of an aspirational academic qualification or as part of a submission application that needs a research as a justification. In my experience, teachers rarely “do research” in the peer reviewed, academic sense. Many conduct project based activities to address local issues that may draw on research as a starting point, but these are rarely reported on or are peer reviewed, apart from their colleagues. The kudos received from their colleagues and supervisors can be the make or break for future work of this nature.  The formal research advocates need to do some hard thinking when it comes to teachers and schools. Poorly presented research that isn’t synced with teacher needs, or the notion that only peer reviewed work counts as valid gets teachers involved in local innovation offside. Being told that their hard work at innovating (including work that achieves growth in student engagement in PE for example) is merely “anecdotal” and not as valid or worthwhile is frankly insulting. It’s a bit like the air of superiority that Jim the Olympic athlete could have when he competes at a local league. Sure, Jim can say all the right things and be a sport about it, but when it comes down to it, they think they’re in the wrong place. Which is a pity, because they were probably there once, aspiring to faster, higher, stronger.

In the old days, amateurism in the Olympics was not only aspired to, but a condition for participation. As the Olympics, arguably, become more a commercial venture, the pressure to abandon the level playing field that amateurism provided resulted in the Olympics we have today. I’m not usually one to call for winding back the clock, but I think we could learn from this. Why not place the school innovators and academic researchers on the same level playing field of credibility, value and validity? Why not spend more time studying what innovators are doing in schools and developing practice from there? This might be part of the issue – that research isn’t reflecting what practitioners want, in a way that they want it. Maybe there are pressures that make the stakes too high for tertiary academia to meet classroom innovators in the middle?

I’ll probably get shot down by some for not including research in this post, and being too anecdotal. But that’s the part of the problem. Apart from specific needs based research that I seek out, it is hard to find stuff  out there relevant to what I do. And isn’t behind a paywall. I will, however, particularly acknowledge the work of Dr Ashley Casey & Victoria Goodyear at the University of Bedfordshire & the PEPRN site, Dr David Kirk and his excellent work on PE pedagogy and Shane Pill as being leaders in bringing research to the classroom teacher. Prior to writing this, I was really interested in research on what teachers thought of research but there was precious little I could find on the topic. Perhaps some one could point me in the right direction?

So, back to those two spectators. Perhaps they should stop having a go at each other and concentrate on the game. And Jim should remember that whilst Jo may not be in the same rarified air as he may be, they both have a love of their discipline that each can help improve. In my humble opinion 🙂 Jonesy

I found this site the other day and just love what it does with a twitter search.
It would make a great backdrop to a workshop or display with tweets coming up as they’re received.
Unfortunately WordPress.com blogs don’t allow iFrame embeds, so I can’t make it look funky. Click on the image to see it in it’s
full glory! 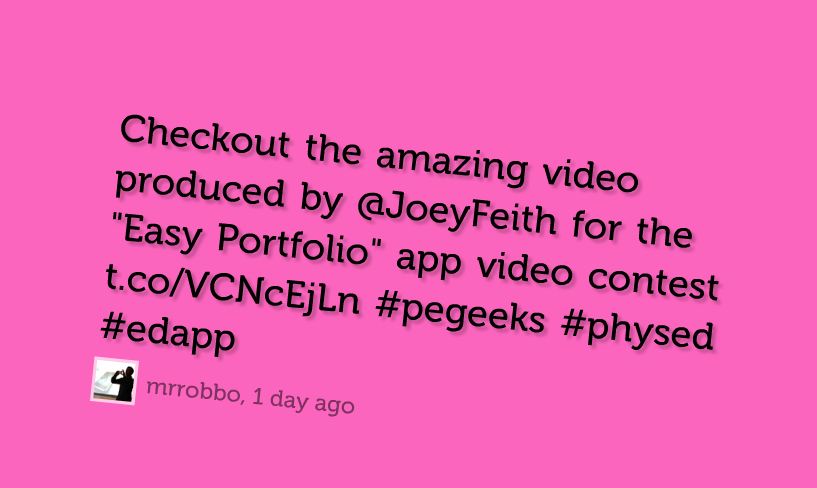