CHANGE – Build your own brewery

I do a lot of thinking when I ride my bike. It must be the extra blood and oxygen  pumping through my head or something, but I seem to think more broadly when I exercise. That’s probably a subject for another post…

Today I was riding and my thoughts turned to beer. I must have wanted one at the end of the ride…who knows…but then I started to think about what goes into making beer.

I’ve done that a bit – made my own beer- and I love the process, the smells and of course the end result.

And then another thought occurred to me – that making beer is a process not dissimilar to the process of change in any organisation, including a school.

Let’s take a look at beer making. You start with a recipe (usually one that goes back over generations) and some basic ingredients – water, grain, hops and yeast.

You malt the grain, mix the malted grain with water and mash (or cook) it, cook it a bit more while adding some hops (flavour and preservative), cool it down and then add the yeast. Bubble, bubble, let fermentation do its thing in optimal environmental conditions and then filter, bottle and enjoy. This is a great change process – grain, water, hops, yeast transformed into an entirely different end result where you can still taste the original ingredients, but they are now represented in a different form. There’s even some substrate (left over) sometimes that can lead to an unpalatable but useful byproduct – like Vegemite.

How to make beer at home – Tyler Hoehne (OC Weekly)

As organisations (and I’ll talk school here, specifically) approach change projects I reckon the process is similar. We bring together various ingredients (people, tools and ideas), mix them using a recipe (usually one that goes back generations) , ferment the plan in optimal environmental conditions (not too hot, not too cold),  bottle and distribute the final product and consume. The substrate in this process can be useful, or unpalatable, as well.

But to me it’s one ingredient that makes all the difference to both examples.

Yeast is the catalyst for change in beer making, and the yeast in your school change project is just as important.

If you’ve ever used faulty yeast in bread or beer making, you’ll know what I mean. Bad yeast fails to change or lift and ends up leaving the final product flat.

So, just as it’s important to have fresh, active yeast for  beer making, so it is just as important to have a thinker or do-er as a yeast-like catalyst as part of your change team. Someone with the ability to help things along.  If you don’t think it’s you, then you need to look around and find them. They’ll usually stand out – they’re the ones that produce fizz when they have a go at something. Can’t see them yet? Examine your personal learning network (PLN), because they don’t necessarily have to be at your school. The beauty of an extended PLN is that  if you don’t have yeast in your own kitchen, then they could just be a tweet or hangout away.

So, get brewing! Cheers 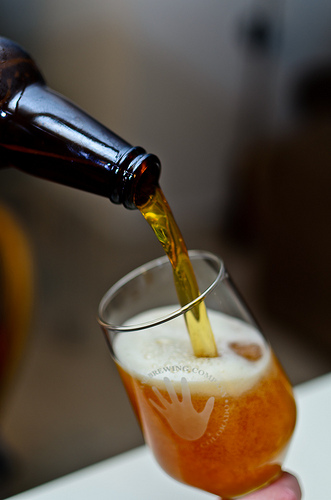