Today I gave two students in my Year 10 Physical Activity and Sport Studies elective class the Mystery Bag Challenge.
In the bag was a collection of balls (soft throwing balls, aero tennis balls, and AFL ball and a Handball), 2 hoops, some marker domes, 2 tennis racquets and some bibs.
While another two students warmed the class up, the Mystery Baggers had 10 – 15 minutes to come up with a game.
They created “Uplink”, and I’ll try to explain the rules as they eventually ended up. 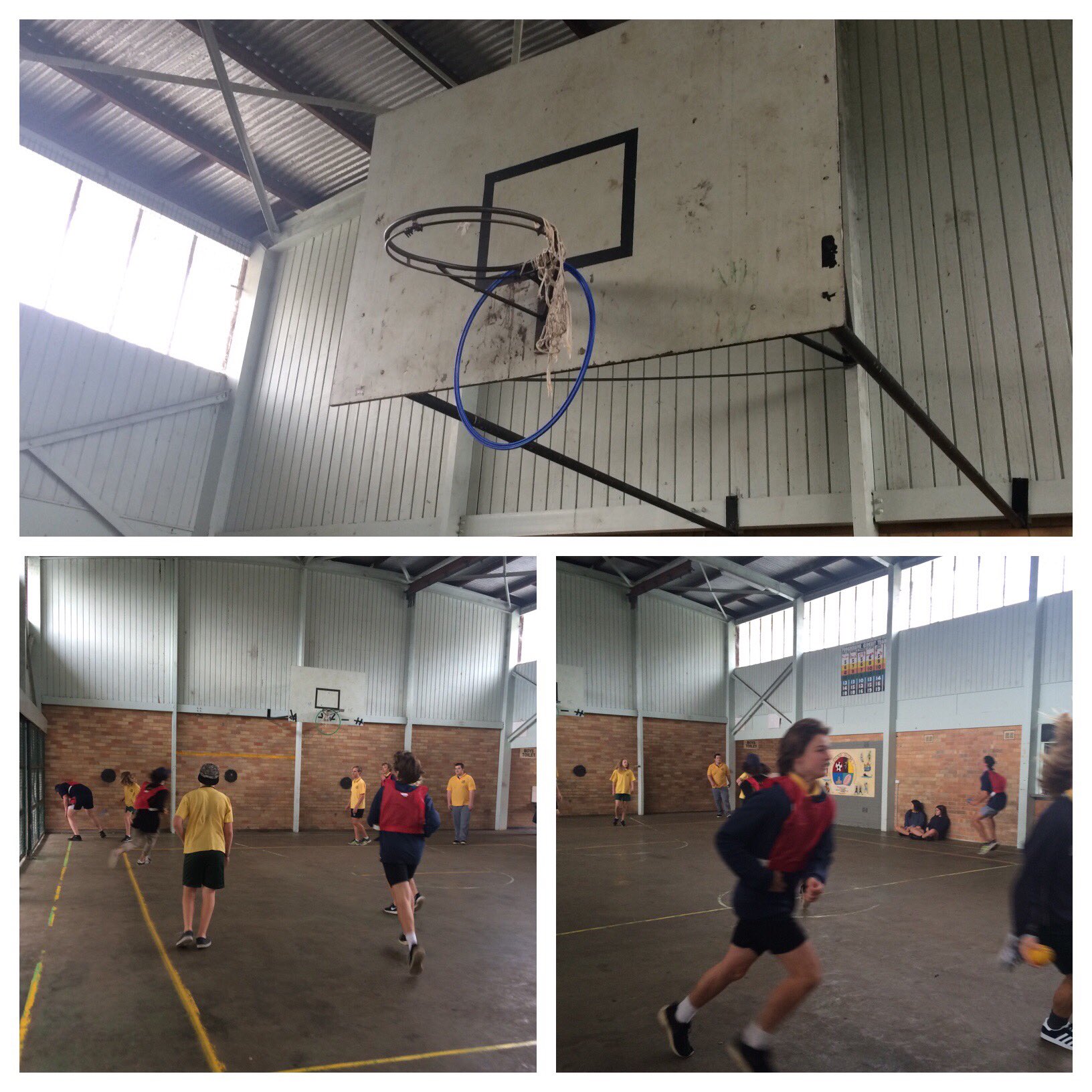 Uplink
Set up
2 teams on a basketball sized court.
The hoops were hung from the basketball rings to create a vertical target.
2 soft throwing balls were chosen as game balls (see image)

Rules
The win condition – the first team to get the ball through the defending team’s hoop.
To start the game, both teams line up against the wall at the end of their defensive end of the court.
The two balls are placed on half way.
On a whistle, the teams send players running to the centre to gain possession of a ball (or both balls if you’re lucky enough)
Players can then roam where ever they want on the court, unimpeded. If you have possession of the ball, and you get tagged in the attacking half of the court. you lose possession of the ball and you get sent back to your defensive half as a reset consequence.
Players can pass as much as they want, wherever they want. They must not get tagged in possession in the attacking half.
To score the ball must be thrown through the hoop, and not touch the backboard
Variation: Instead of having the hoops placed in position before the game starts, the game starts with teams having to get their own hoops in position before they can start scoring. This can be made more difficult by including some penalty constraint – time limit, height limit of the hoop deliverer, etc.
Comment
Like “Capture the flag” , players soon realise there are strategies to consider in both offence and defence. The game becomes a swirling, mass movement affair.
We trialled rules, and then stopped to evaluate them, and then made improvements, at least 3 times in the first 20 minutes. Once the final iteration was settled upon, the game then ran without interruption for 20 minutes.

All this from 15 minutes planning, with a bag of gear they’d never seen before. Never doubt your students ability to create, refine and improve their own games. I never cease to be amazed at their inventiveness.