I was pretty excited this year – I was getting my own room for the first time in about 30 years of teaching. It was an old Art room, at the arse end of the school campus. No-one wanted it, but I saw the potential of making it into a space that kids would be comfortable working (and hopefully learning) in.
Luckily it was scheduled for a refurb, so over the summer break it got a fresh paint job, new vinyl on the floor and a general spruce up.
I learned later that it wasn’t actually exclusively mine – I would be sharing it with another class ( a Japanese class, actually), but it was mainly mine, so I didn’t really object. The teacher knew I intended to try some new things. I mean, what could possibly be wrong with that?
I phished around for grants to put in some furniture, but had no luck. No even our own DoE Futures Learning Unit were willing to take up my offer to be a demo room in our region. I planned to scrounge some old couches, or hit up Gumtree for some bargains, but as of yet I haven’t had any luck.
I’d obviously mentioned to colleagues that I intended to get couches etc for the room, because not long after the teacher of the Japanese class sought me out and expressed their concern at not having the room set up “normally”. This both amused and saddened me. But it didn’t shake my resolve to do something a bit different.
So I had to make do with an assortment of tables and chairs that were available. I quickly realised that it was in the arrangement, not the type of furniture, that made all the difference to the kid’s disposition in my class. We went for islands of work spaces – tables of small groups. I consciously avoided creating a “front of the room”. The projector and display board are on one wall, but I don’t focus on that as the front.  I move around a lot, so there is no focal front in the room.
I put together some visuals on SOLO taxonomy explained and an adaption for inquiry learning that modeled a learning cycle I wanted the kids to adopt. they went up on the walls as stimulus and guidance.
I also made a decision about the teacher’s desk. I wasn’t going to have one in my room. I had a laptop stand near the projector. That was the only place I repeatedly visited if I demo something from my laptop. It’s been 7 weeks now, and I can honestly say I don’t miss it.

So imagine my surprise when I went into my room yesterday – AND THERE WAS A TEACHER’S DESK AT THE “FRONT” OF THE ROOM.
I think I even exclaimed “WHAT THE HELL?” in front of the kids.
There was only one thing for it. With the help of a few kids, we lugged the desk out again and hid it under the stairs. Like a commando mission. 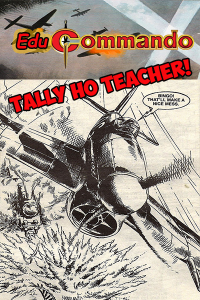 I did this for two reasons. One, I had no use for it. Secondly, I wanted to prove a point to whomever decided to put it in there. I think that teachers assume some symbols of their practice (like desks at the front of the room) are so ingrained and traditional that they need to be there to “be” a teacher. I disagree. I find without a desk I feel free-er; I feel compelled to move around and spend more time with the kids. If the teacher (and I’m sure it was a teacher) that put it there wants to know where it is, then I’ll take it as an opportunity for a professional dialogue.

Maybe that’s just me. Are you anchored in your room? Are you prepared to ditch the desk?